Given the coordinates of two different points on a line, this slope calculator can be used to find the slope and equation of the line. It also provides a diagram of the line, as well as determines the angle the line forms with respect to the x-axis. To use the calculator, please provide the coordinates of two different points and click the "Calculate" button. 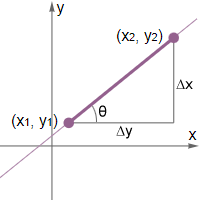 The slope of a straight line is a measure of the steepness of the line. It is often described as

because it tells us how many units the line increases in the vertical direction (rise) over a given change in the horizontal direction (run).

Given two different points on a line, it is relatively simple to calculate the slope of the line using the slope formula.

Given two different points on a line, the change in y is calculated by subtracting the y-value of one point from the y-value of the other point. Similarly, subtract the x-value one point from the x-value of another. Note that it does not matter which value is subtracted from the other, as long as the points used are consistent for both y and x. For example, given the points (3, 1) and (2, 4), the slope of the line can be calculated as follows:

Notice that in either case, the result is the same. However, if we were to have subtracted 4 from 1, but then subtracted 3 from 2 instead in the first example, the slope would have been 3 rather than -3, which is incorrect.

How to find the slope of a line?

In both of these formulas, m represents the slope of the line. Thus, given an equation of a line, if we can convert the equation to either of the forms described above, we can simply read off m to determine the slope.

In this linear equation, the slope of the line is 2, and the y-intercept occurs at (0, 7). Slope-intercept form is often used when introducing linear equations because it very quickly gives us information that we can use to graph the line. We know one point on the line, (0, 7), because the y-intercept is given. Thus, to graph the line, all we have to do is apply the slope formula. Since slope is