This body fat calculator estimates body fat percentage based on several methods, including using body mass index (BMI), relative fat mass (RFM), the US navy method, and the Jackson-Pollock skinfold method. To use the calculator, select the calculation method, provide the corresponding information, and click the "Calculate" button.

To ensure accuracy, please measure the circumference or height to the nearest 1/4 inch or 0.5 cm. If measuring the skinfold, please take the average of 2 or more measurements.


What is body fat?

There are a number of different types of fat, but they can be broadly categorized as essential fat or storage fat.

Essential fat is fat that is necessary in order for the body to function normally. It is found in parts of the body such as the heart, bone marrow, lungs, liver, spleen, and more. Women need more essential fat than men for reasons related to child bearing. Generally, the minimum amount of body fat a woman needs is 12%, while men need 3%. Body fat percentages below these levels is unhealthy and can lead to the body being incapable of carrying out necessary processes and functions; examples include slow wound healing, hair loss, frequent sickness, and more.

Any fat above ~3% for men or ~12% for women is referred to as storage fat, or nonessential fat. Storage fat is good in appropriate amounts, but excess fat that leads to overweight and obesity has detrimental health effects. The generally accepted overall range of fat for good health for men, including essential and storage fat, is 10-22%; for women, it is 20-32%. People who remain within these ranges are at lower risk for developing health effects such as obesity, diabetes, high blood pressure, and certain cancers.

Storage fat on the other hand, is fat that accumulates in adipose tissue, that is stored for use in case of emergencies such as starvation or severe caloric deprivation. While some degree of storage fat is necessary, excess levels of storage fat is almost universally considered to have negative health impacts, particularly when concentrated around the abdomen.

Although most types of storage fat can be categorized varying degrees of good or bad, visceral fat is largely considered to be bad fat that should ideally be avoided. Visceral fat has been shown to generally increase with age, and has been linked to a number of adverse effects such as increased risk of breast cancer and colorectal cancer, stroke, type 2 diabetes, dementia and Alzheimer's disease. A large factor affecting visceral fat is diet. Heavily processed foods are laden with large amounts of sugar and/or saturated fats and trans fats (cookies, sugary drinks, candy, etc.), and contribute significantly to visceral fat. While some levels of saturated fats can be good, trans fats in foods should largely be avoided whenever possible. Regular exercise, as well as consuming healthier foods such as lean proteins, whole grains, beans, fish, and eggs in moderation can help decrease visceral fat.

How to measure body fat?

There are many different methods used to measure body fat. The methods used by this calculator include use of body mass index (BMI), relative fat mass (RFM), and the US Navy circumference and Jackson-Pollock skinfold methods in conjunction with the Siri formula.

Body mass index (BMI) is a measure that is used to categorize a person's weight, be it underweight, healthy weight, overweight, or obese. It is a useful screening measure but it is not necessarily indicative of the body fatness or health of an individual. It is frequently used because the only measurements needed are the height and weight of the individual. Once height and weight are measured, BMI can be calculated as:

BMI is, by itself, not a measure of body fat. However, it is correlated with other more direct measures of body fat. Studies have been done to create equations that estimate body fat percentage using BMI:

where age is age in years, sex is 0 for males and 1 for females, and BMI is the person's body mass index.

where age is age in years, sex is 0 for males and 1 for females, and BMI is the child's body mass index.

It is worth noting that measurement of waist circumference is not standardized. For the study that developed the equation, waist circumference was measured using measuring tape around the unclothed waist of participants in a horizontal plane at the level of the upper part of the pelvis, while the participant was standing, and after they exhaled.

Once body density is determined, it can be plugged into the Siri equation to find body fat percentage: 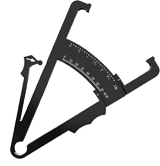 There are a number of skinfold methods used to measure body density, which can in turn be used with the Siri equation to estimate body fat percentage. These skinfold methods make use of a skinfold test, also referred to as a pinch test. In a skinfold test, calipers are used to precisely measure a pinch of skin at a number of different, standardized sites on the body. The thickness of these skinfolds is a measure of the subcutaneous layer of fat. Once the thickness has been measured, various equations can be used to estimate body fat percentage. The methods described below differ in the number of sites measured, where the number of sites measured does not necessarily improve the accuracy of the result. Rather, the accuracy of the result is based more on each person's unique body fat distribution. Thus, the specific method and equations used should be selected based on which sites can be most consistently and precisely measured for a given individual.

The Siri equation is based on the model of the human body as being comprised of two compartments: fat mass and fat-free mass. The densities of fat mass and fat-free mass have been experimentally determined, so the Siri equation estimates a person's body density using the density formula, density = mass/volume by substituting volume with mass/density.